Summary: After the triumphant finish to his high school running career, Matt is riding high until a phone call from his best buddy Gary in his old hometown of Craigie, Idaho, brings him back to reality with a crash. Gary wants him to come back to Craigie for the summer, bringing Meg and Will, to work on Matt's own ranch. After a hard struggle, Matt decides to go for Meg's sake, to get her out from under the housekeeper/mom role she's been laboring under since her mother died. Will, with an agenda of his own involving Carey, Lew and their newly-in-residence stepmother, refuses to go....

CHAPTER 6
While Will was strengthening his fortifications for the coming campaign, Matt and Meg were looking for the right moment to tell the rest of their families about their plans. Matt's chance came during dinner. He had hoped to wait until Michael and Jenny had gone to bed, but Sally unexpectedly precipitated the discussion by asking if he'd heard anything from Gary about the summer.
"Yes," Matt said. "I called him last night. The plans have changed."
"Oh? When is he coming?"
"He's not."
"Oh, Matt." Sally sounded genuinely disappointed. "What happened?"
"He has to go to summer school." Matt hesitated, not sure how the Ryders were going to react to his news. "He wants Meg and Will and me to come up there instead--to work on a guest ranch wrangling horses and building stuff." Glancing up, he caught Sally and Ryder looking at each other. "I said we would," he went on slowly, trying unsuccessfully to read the meaning of their silent exchange. "Meg and I are leaving Thursday, taking the Schuyler station wagon and trailering Cricket up...."
Something was definitely wrong, but before he could ask them what it was, Jenny began bombarding him with questions. Where was he going? How long would he stay there? What could he do there that was better than what he could do at home? Why couldn't she go too? Who would ride bikes with her and take her to the beach and the zoo? "You promised!" she roared, punching him in the arm and calling him a rude name before Sally could intervene and hustle her off to her room for a talk and a calming chapter from The Wizard of Oz.
As silence descended again, Ryder caught Matt's eye. "My feelings exactly," he said.
Matt thought he was kidding, but with Ryder it was hard to tell. He had a face that didn't reveal much about his feelings; the stronger his emotions, the deeper they were buried. It was a trick Matt was trying to learn. "You want me to stay here?"
Before Ryder could answer, Michael interrupted. "I want you to stay too, Matt. Please don't go. Please...."
"It's only for the summer, Michael. Just a couple of months. I'll be back before you've noticed I've gone. I promise."
Michael's eyes filled with tears. He slid off his chair. "Your promises are no good," he shouted, heading for the safety of his own room. "You never keep them!"
Ryder surveyed the vacated chairs and grinned. "Remind me not to invite you to our next dinner party," he said.
Matt's answering smile slowly faded. "I didn't expect all this. Maybe it's not such a good idea?"
As soon as he made the statement into a question, he knew what Ryder's answer would be.
"You won't know unless you try it."
"But you and Sally don't--"
"Sally and I are old enough to know how quickly two months go by. We were...surprised, that's all. If that's what you want to do, Matt, go for it. We won't yell about promises."
"You're sure? It's not like I'm leaving for good, or anything."
Ryder hesitated an instant too long, giving Matt a sudden understanding.
"Is that it? You think once I'm back in Craigie I'll want to stay?"
"You don't think that's...?"
"No way!" Matt said forcefully. "There's nothing there for me anymore. I'm going because it's a chance to get Meg out of the housekeeping rut she's been in at home for the last two years. That's all. This is where I belong. Isn't it?" he challenged Ryder. "Isn't that what it says in those adoption papers? You're stuck with me for the rest of my life?"
"My god, is that what it says?" Ryder exclaimed. "I knew I shouldn't have signed them without reading the fine print." They laughed at each other, the tension gone.
"Well, now we've got that straightened out," Matt said, "I guess I better go talk to Michael. If that's all he's worried about, I'll make him a promise he can believe in...." 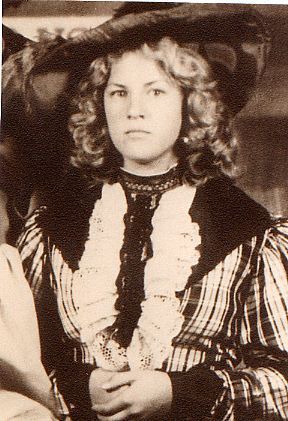 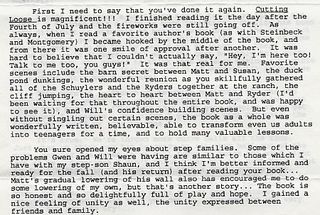 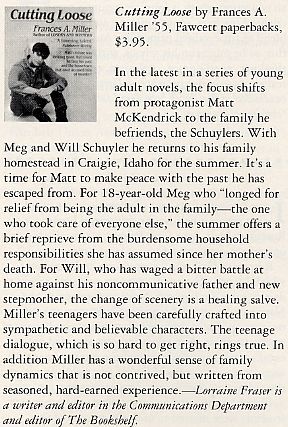 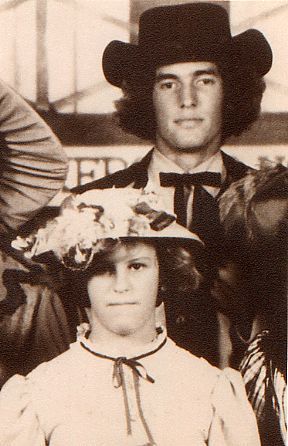 CAREY and WILL (photo taken at Disneyland) 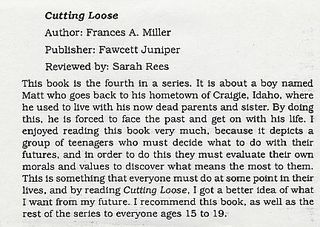 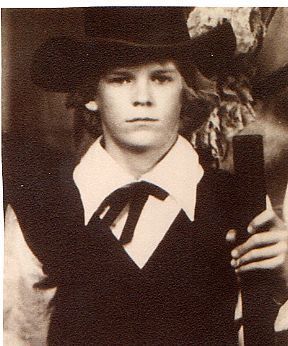