Grinning sheepishly at Miss Osborn, I let Cassie go. I could see her thinking about heading on up the tree, but she jumped down finally. All thirty kids were trying to tell Miss Osborn what happened at the same time.
“All right, all right,” Miss Osborn said, laughing. “I think I have the idea. I also think what everybody needs is lunch and a cold drink. So scoot.” Like a flock of parrots flitting noisily through the jungle, they went.
I was wishing I had her magic touch.
Miss Osborn took Cassie’s hand. She looked up at the old oak and down again at me. If she had been any other grownup, I would have expected angry accusations and a lot of useless suggestions about what I should have done. But she was Miss Osborn. She winked at me.
“Thanks for saving this red-headed monster again,” she said.
“That’s okay,” I said. “That’s what I’m here for.” I looked at the backs of my hands and then at the new scrapes along Cassie’s bare legs. “Sorry I was so rough on you, Cass.”
It would take more than a couple of scrapes to make Cassie complain. She stuck her tongue out at me.
Miss Osborn gave her hand a little shake. “Cassie…,” she said warningly. As the two of them walked away, I heard Cassie asking Miss Osborn if she had any kids of her own.
Miss Osborn was one of the new teachers coming to Hillcrest Elementary in the fall. She wasn’t a teacher exactly—she was the school secretary. But the secretary is the only grownup you can really be friends with—the only one who doesn’t have to give you grades or make you behave. Miss Osborn was going to be a great secretary.
She was the first Flatlander I’d ever met—one of the black ones, like DeVon. Every time my dad said something about Flatlanders being different from Hillsiders, I thought of DeVon and I knew he was right. They even talked differently from us. And their names—I never heard names like Taisha and DeVon before. When I thought about Miss Osborn, though, I wasn’t so sure. Miss Osborn was the best.
Behind me something dropped heavily out of the tree. I whirled around. DeVon was down at last, grinning broadly. Everything that happened, good or bad, was just a joke to Mr. Big. With a flourish he produced a small black kitten from under his t-shirt.
I watched it skittering frantically into the underbrush, knowing it wasn’t any better off than if he’d left it in the tree. It was probably going to starve to death…or be eaten by something bigger. I’ve spent a lot of time alone in the park, and seen a lot of those little skeletons.
“Man, you a real mess,” DeVon said. He didn’t sound particularly unhappy about it. “You a counselor, man. You ain’t supposed to beat up on your little kids.”
I could feel myself heating up again. “You’re a counselor too, in case you’ve forgotten. You aren’t supposed to let your kids do dumb things and get themselves hurt.”
Instead of getting mad, DeVon looked pleased—as if he had me right where he wanted me. “You want a fight so bad, Hansen,” he said, “why not try it with somebody your own size?”
I shook my head. “I’m not fighting you.”
“Why not? You one of them pacifists?” Devon danced around me, jabbing at my shoulders like a boxer. “You afraid to fight?”
I wasn’t afraid exactly. Well, okay…I was afraid, a little. I’ve never fought with anybody, but it doesn’t take a genius to know that no matter what it looks like on TV, getting hit or kicked in real life has to hurt. I didn’t want to beat up anyone else, and I didn’t want anyone beating on me. The whole idea was stupid. Human beings are supposed to talk to each other.
“Come on, man,” DeVon jeered. “What you waiting for?”
There was no way to explain how I saw things to people like DeVon. You either understood it or you didn’t. It was obvious he didn’t. Anyway, I was wasting valuable time. This half hour while the kids were eating lunch was the only free time I was going to have today, and I really needed it.
“It’s your turn to eat with the kids,” I said. What I really wanted to say was, Will you please get going and leave me alone?
The next thing I knew, DeVon had the front of my shirt twisted in one hand and his other fist in my face. “Don’t tell me what to do, Hansen,” he said furiously. “I’m not just as good as you. I’m better. You hear me? I am the best!”
My mouth was hanging open. I snapped it shut. Best at what? What was he talking about?
Suddenly, as if signaling the end of a round in the boxing ring, the distant lunch gong broke the silence between us. DeVon straightened slowly, letting go of my shirt. We stared at each other for a second. Then we both turned and headed in opposite directions.

For individual or autographed copies, use the "E-mail me" Quick Link in the left-hand column 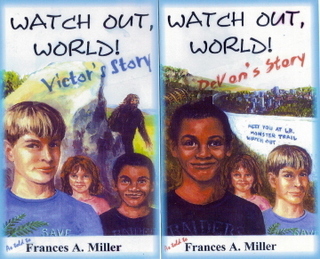 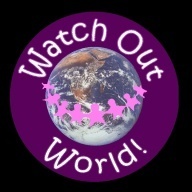 2 1/4 X 2 1/4 inch stickers (they make great buttons, too) for your reading group. Email me (See Quick Links at right) for ordering info.
Loading…}